How do you get to number one in the App Store? 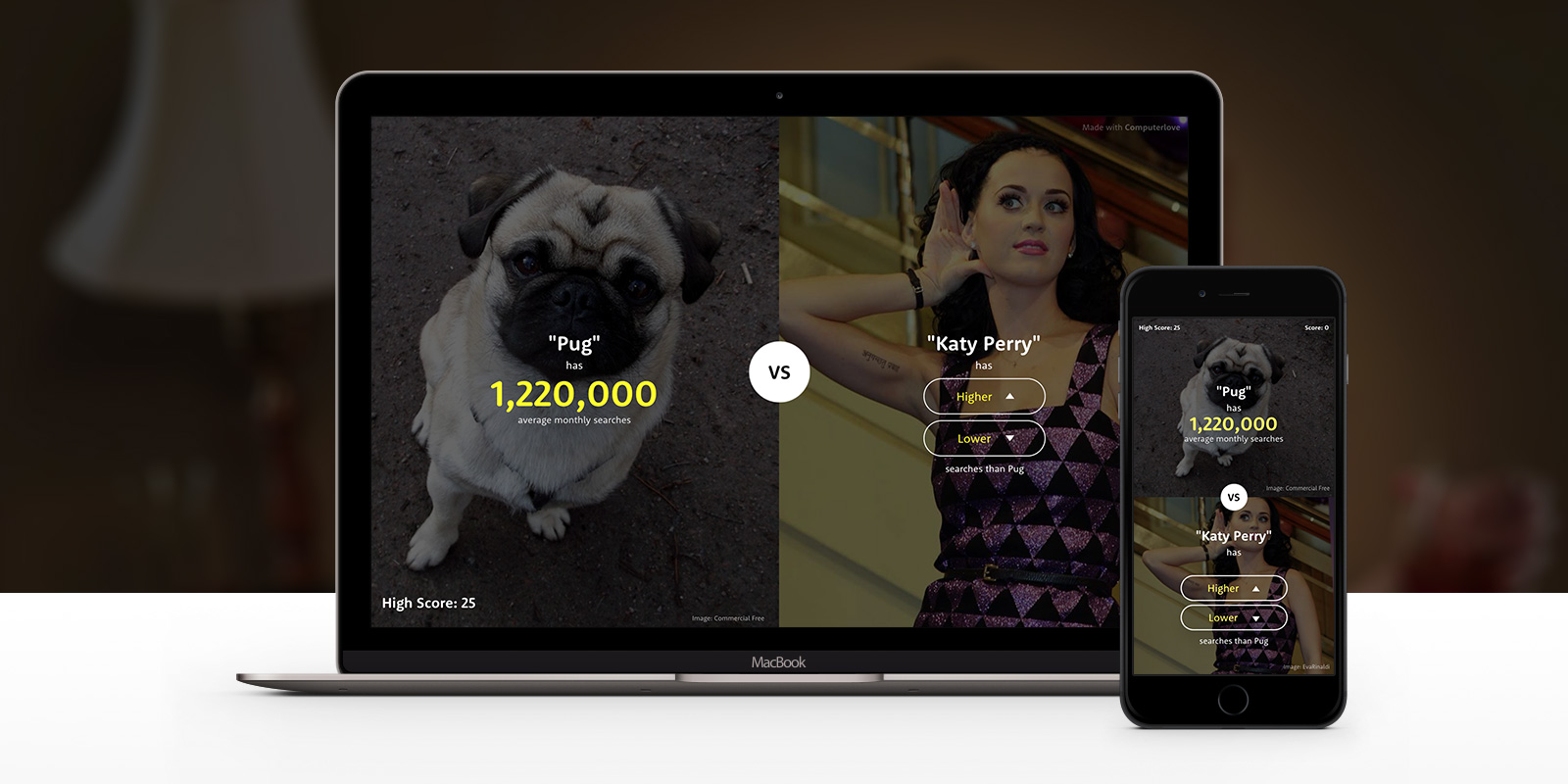 app downloads across iOS and Android

plays in the first 12 months

views of the PewDiePie video

At Code, we always encourage the team to share and test ideas with one another. Doing this gives us the opportunity to experiment with new technologies, as well as the chance to exercise our creativity independent from client briefs.

The Higher Lower Game started out as an idea that came from our Search & Content team. We approached the 'dry' subject of Google's search volume data with the aim of showing how compelling it can be when you start to think about what it says about human nature. The Higher/Lower Game

So we started up a side project based around the idea of creating a product that somehow compared Google searches, and The Higher Lower Game – a web game and iOS / Android app that asks players to guess which of two Google search terms is most popular – grew from there.

With a low barrier to entry, The Higher Lower Game’s been rigorously tested to ensure it’s as intuitive, usable and emotive as possible.

The jeopardy in building a high score makes every decision exciting, while the ‘ticking up’ reveal of the number builds anticipation with each guess. No matter the result you get, the funny animated GIFs on the ‘Play Again’ page coupled with harsh but encouraging language makes it especially hard to resist having “just one more go”.

As you’d expect, there are times when the answer to an in-game comparison is simply unbelievable. Its moments like this that create emotional resonance, keeping players coming back again and again.

The game launched in December 2015, and we ploughed our efforts into spreading the word. Eventually we caught the attention of PewDiePie, the most subscribed to YouTuber in the world, who posted a video of himself playing the game.

From there, things just ballooned as our game officially went global and new videos of vloggers playing along started being uploaded from all over the world (the fact that the game’s responsive definitely helped here as it allowed them to use it in a filming-friendly landscape format).

So, as always, our next question was: what next? To keep the momentum going, we decided to turn the game into a real product that would allow us to do what we do best: build, measure, learn.

In order to build on this early success, we pulled together a product team to create an app version of the game that would enable us to both monetise it and reach an even larger audience.

After its release, the app rocketed to number one in the Top Free Apps Chart on the iOS App Store and remained there for a whole week (until Pokemon Go – which went on to become the most popular game of the year – knocked us off the top spot).

We’re now focused on introducing features that improve the user experience and/or generate revenue; by reinvesting this revenue, we’re then able to iterate and improve the game further. This gives YouTubers fresh material to work with, and their posts drive traffic back to the game.