Everyone loves a mash-up, right? Connecting two seemingly unrelated things is a powerful creative technique that we often use in idea generation sessions. Sometimes it’s just a tool for thinking differently or unearthing a non-obvious idea, but sometimes the mash-up is the idea.

For example, we once asked “What if Volkswagen produced a coffee machine?” for our client, JCT600.

And a while back, a few of us got in a room, overdosed on Haribo, and wondered “what if websites were video games?” Thankfully our MD Louis is a world-class nerd with a record-breaking Transformers collection and a growing set of retro arcade machines right here in our office, so, with his blessing, we let the question lead us where it may. 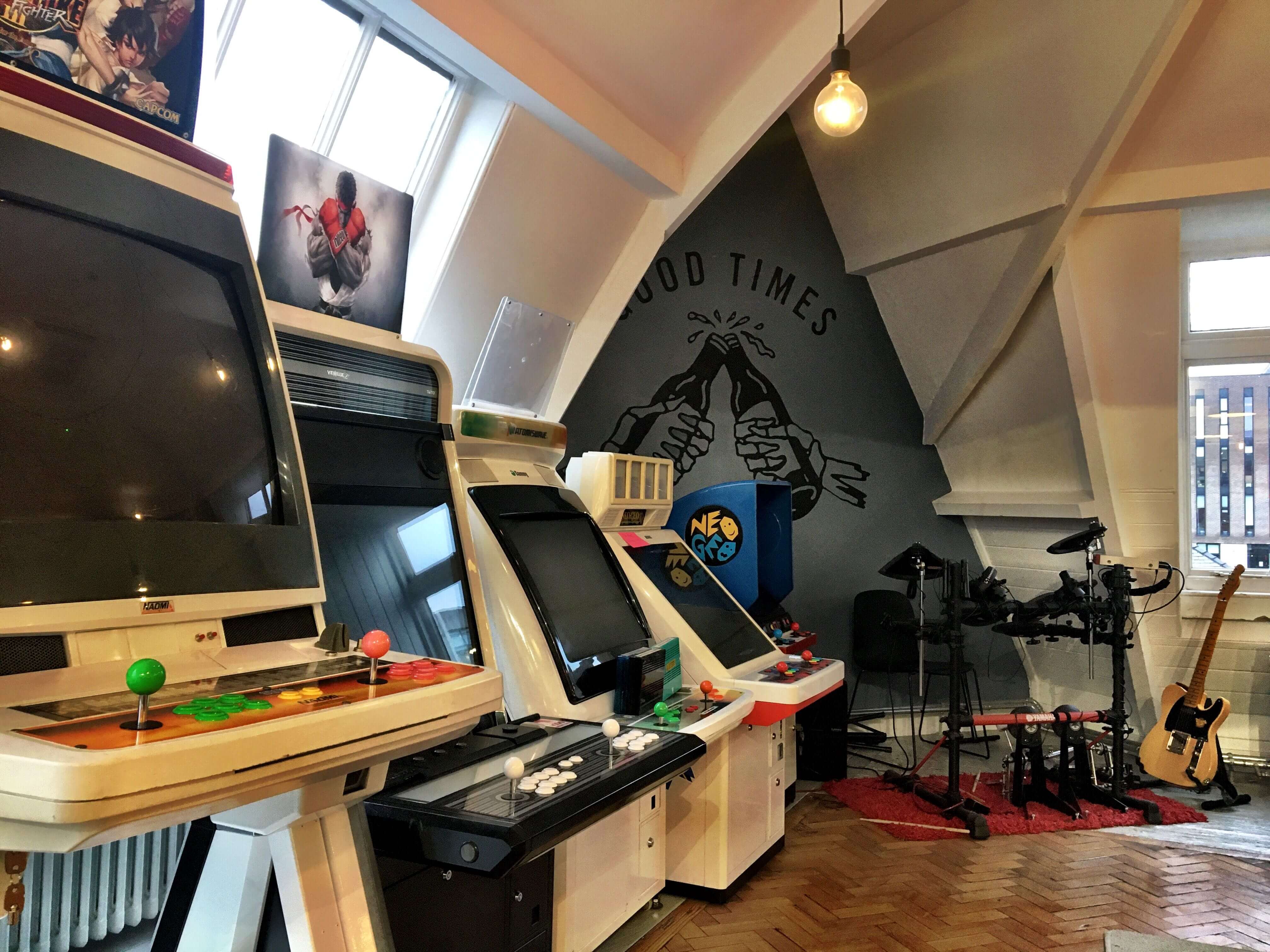 We hoped we might create something fun and memorable, but it was also an opportunity to simply explore new ways to ideate and collaborate effectively.

In a small, multi-disciplinary group, we brainstormed popular websites, and used mind-maps to individually explore what made each site socially interesting or unique. We then discussed our thinking as a group.

On the wall, we had a big, visual reference showing a wide array of video games from years gone by, along with a couple of different game genre ‘maps’. We started discussing the games we remembered playing as kids, and the more dedicated gamers in the group gave us the lowdown on some of the more obscure titles.

We then moved into crazy 8s (a rapid technique for quickly sketching ideas), to each start exploring some potential website/game mash-ups. Would Reddit be an RPG? Would eBay be a compelling real-time-strategy classic? And how the hell would we visualise any of these concepts in a way that makes some vague amount of sense?

Whilst we’d normally move into an activity like T-bars at this point (a technique for illustrating ideas in a bit more depth), we already had some promising ideas that felt easy enough to understand. We also had some that we loved, but on reflection were either borderline-libellous, or a tad too risqué, so we ruled those out.

Next, we secured some decent wall-space here in the studio where, in our free-time, we started sticking up more detailed sketches along with moodboard-style inspiration to guide the ultimate look and feel.

Soon, we had five clear mash-ups to focus on, and a notion of how to visualise them in a consistent way. Two of our designers then got to work turning these into assets we could share with the world.

Websites as video games: The final 5 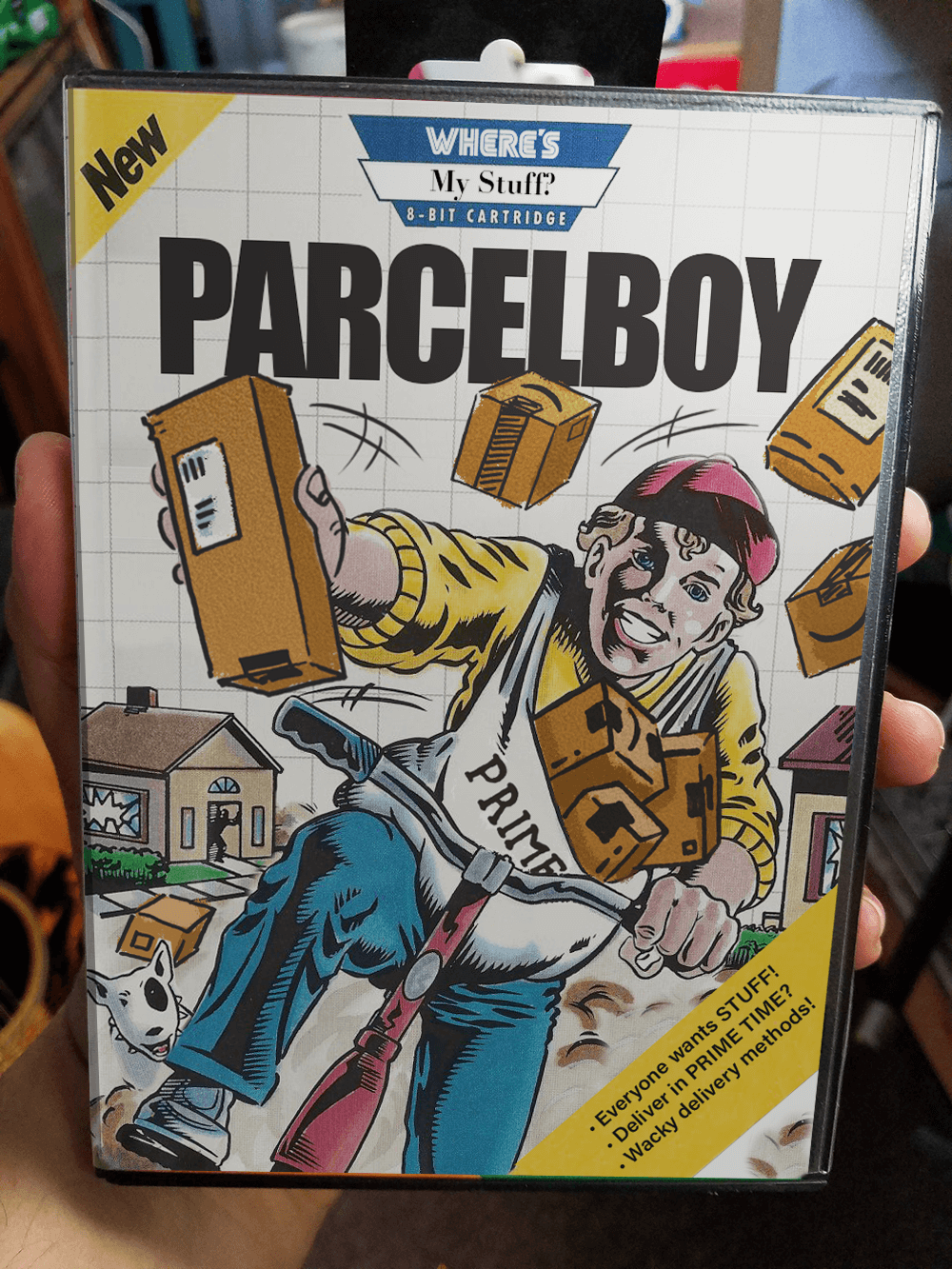 In 1994, Amazon was founded by Jeff Bezos - now the richest person on the planet. With Amazon's world-dominating popularity, this was one website we couldn't ignore. And what better retro game to combine it with than 1985's NES classic Paperboy? 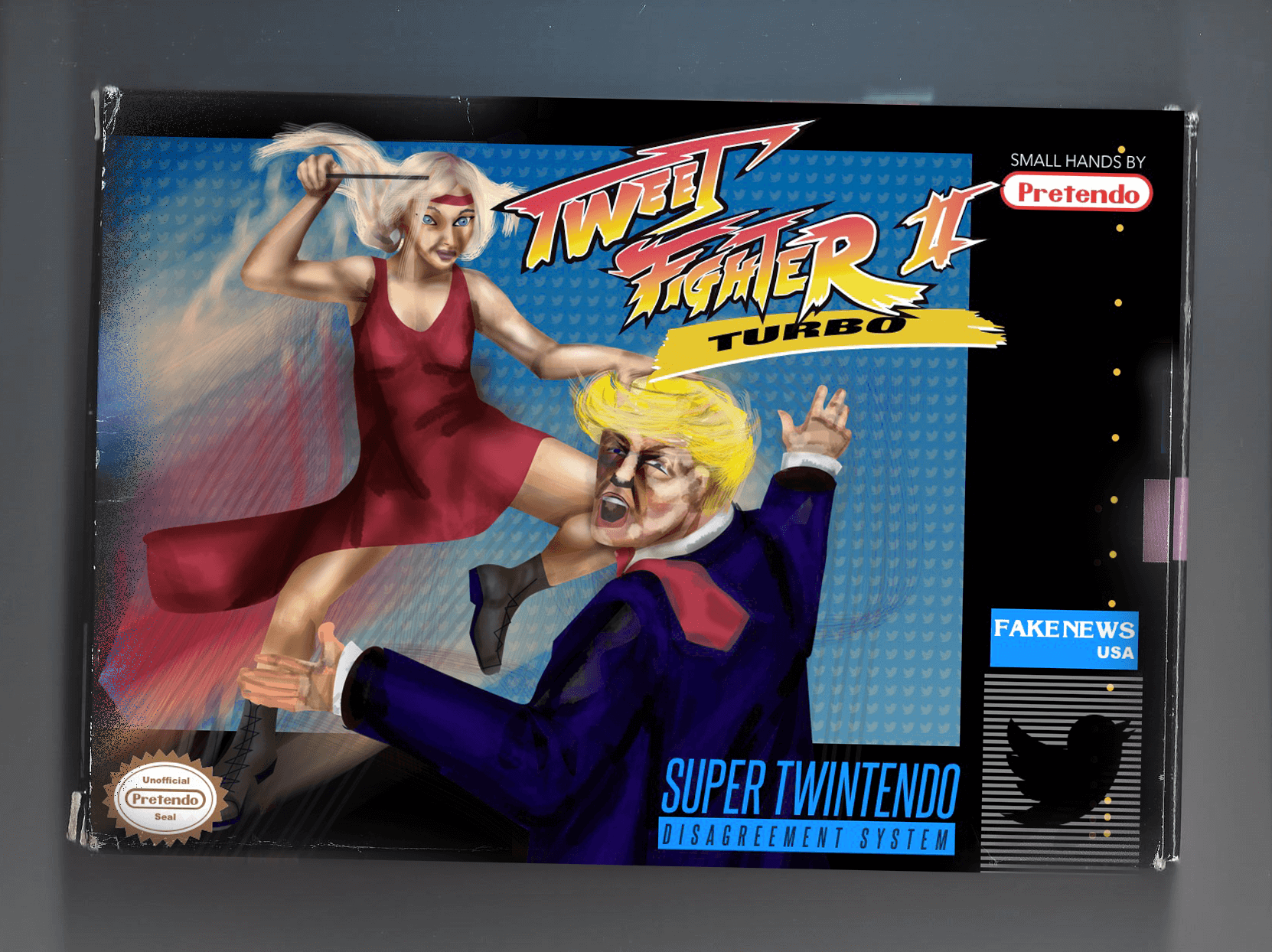 Let's face it, Twitter can be an angry place. Since Trump's shock electoral triumph in 2017, the tribal shoutiness on the platform has only become worse, with the President himself often setting the tone. It was ironic, to say the least, to see the most ridiculous leader of the free world in history telling Greta Thunberg work on her anger management recently. Thunberg has shown she's more than capable of standing her ground, but our Twitter / Street Fighter mash-up pays homage to another of Trump's digital adversaries - JK Rowling - who has brilliantly parodied his childlike outbursts in the past. 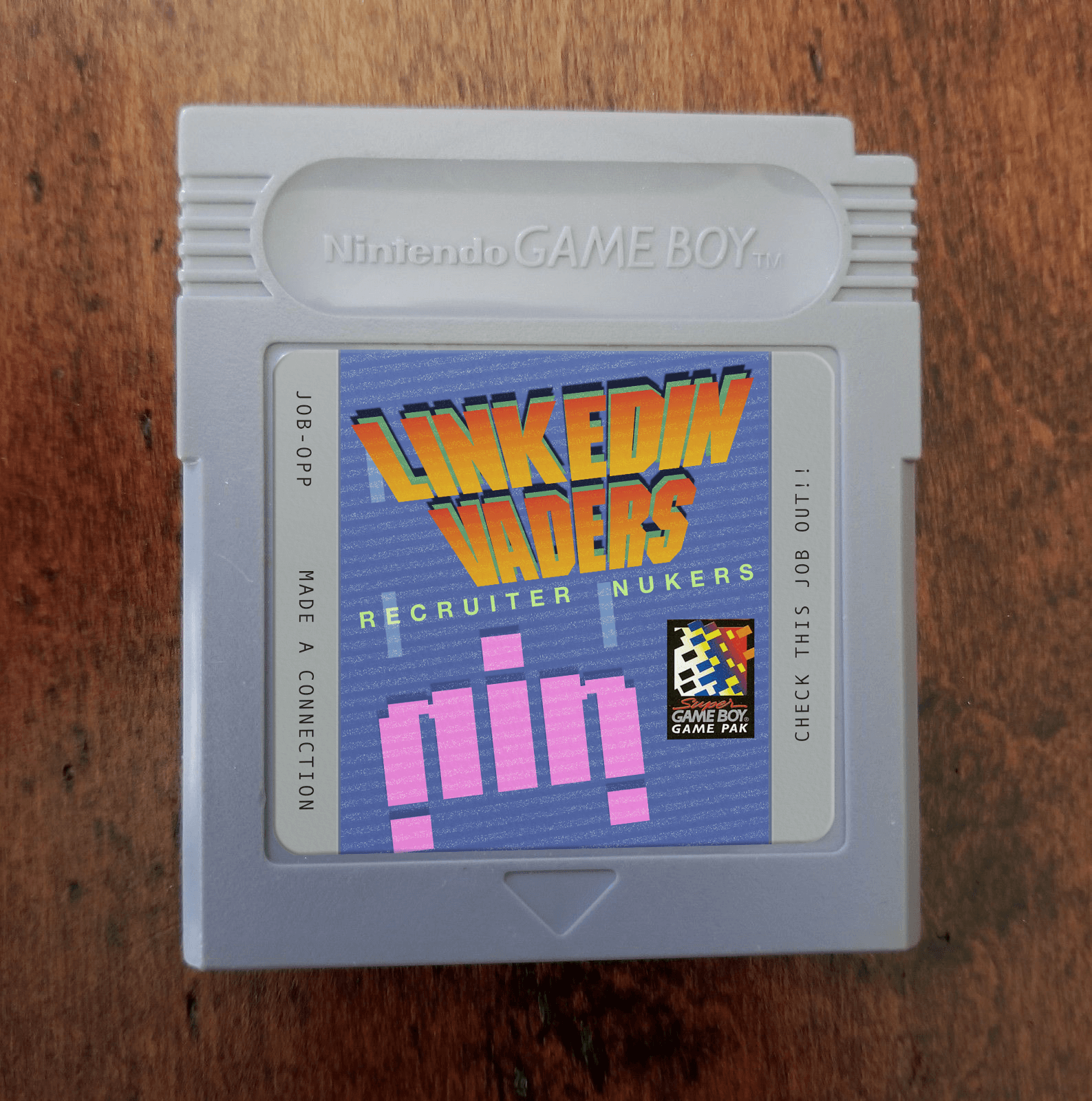 Moving on now to a very different social network... If you're on LinkedIn, you've probably seen some truly cringeworthy attempts at self-promotion on the platform - indeed, there are whole Twitter accounts dedicated to highlighting the most laughable examples. The platform has its uses, for sure, but perhaps the most irritating thing about LinkedIn is the relentless recruiter spam you'll find littering your DMs day-to-day. Here, we've immortalised the battle to defend your inbox from these seemingly endless invasions, inspired by the seminal 1978 arcade classic Space Invaders. 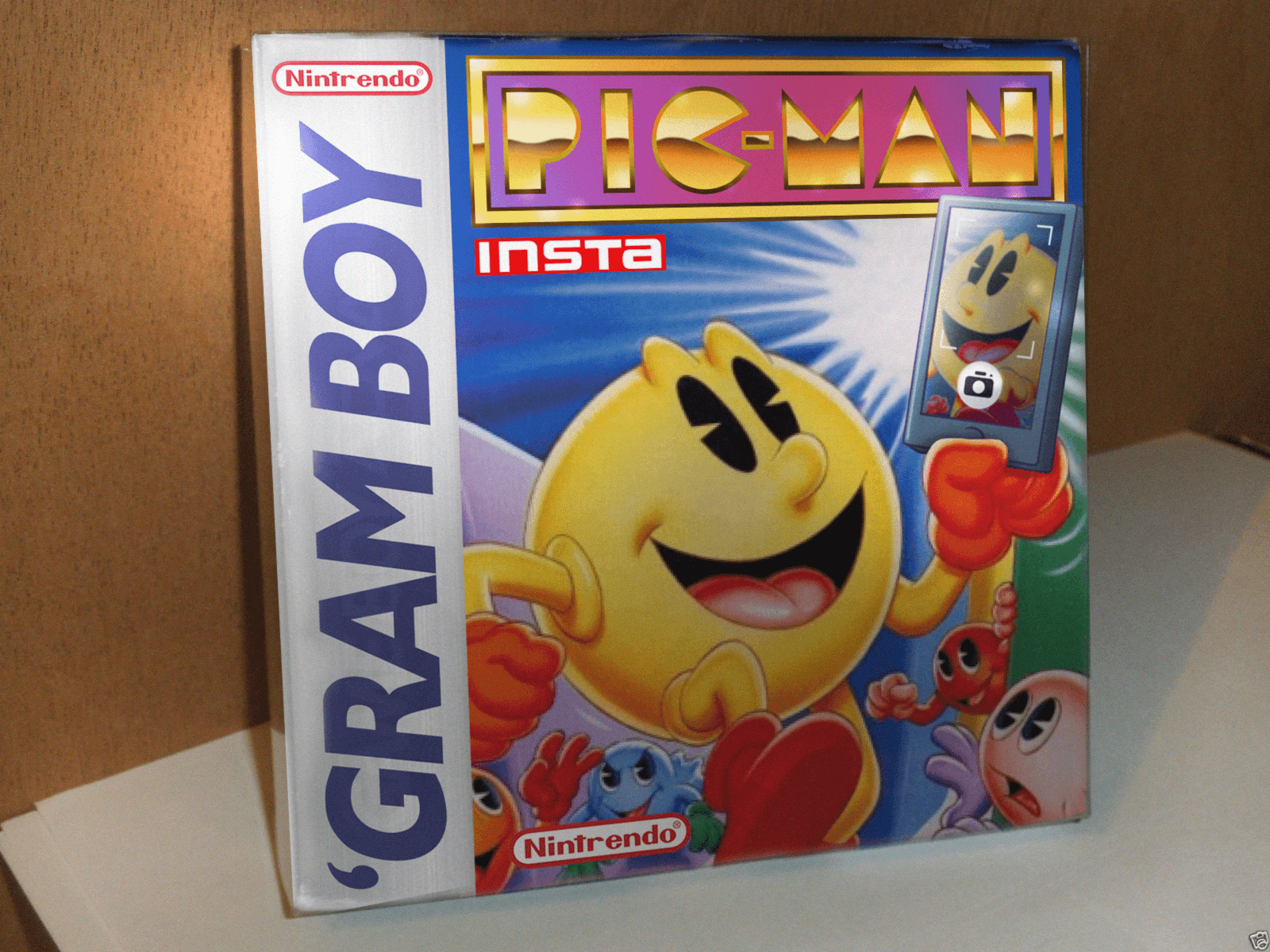 Pac-Man first appeared back in 1980, and remains as iconic as virtually any image from 20th-century pop culture. We were drawn to the parallels between Pac-Man's quest to gobble up as many Pac-Dots as possible, and the the way Instagram has us all hoovering up as many likes as we can. And when we realised there was another decent punning opportunity in the title, there was no turning back. 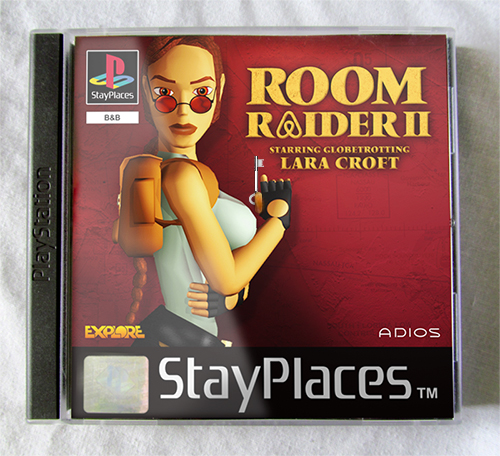 Since its arrival in 2008, Airbnb has changed the way many of us travel, just like Tomb Raider revolutionised the world of gaming back in 1996 with its cutting-edge graphics, complex controls and immersive environments, whilst Lara Croft has since been recognised as the world's most recognisable female video game character. With her globe-trotting, adventure-heavy antics, it's frankly amazing that Airbnb haven't already claimed her as their mascot by now.