Over the last year, people have become more aware of their own ‘digital wellbeing’.

For a variety of reasons, ranging from the personal to the political, there’s a growing sense of unease around the role of digital technology, and specifically smartphones, in our lives. In response, both Apple and Google have introduced features that help people track their ‘screen-time’ and usage habits.

Whether we like it or not, we’re being nudged to reflect on our behaviour and think about how we might use these devices in a healthier way.

As a company that creates digital products and services, we’re deeply interested in the role these devices play in people’s lives, as well as how this makes people feel. And this is something all organisations with a digital presence should care about in 2019 and beyond.

In order to learn more about the UK’s screen-time, we surveyed 2,077 people aged 16 and over – our key findings are presented here (and you can access the full data in Google Drive at the bottom of this post).

If you want to understand what impact digital technology is having on our wellbeing, and how the costs and benefits of us spending so much of our time on our mobile devices stack up, then keep reading.

Compare your screen-time to the rest of the UK

In a hurry or just want to get the key insights quick? We've put together a screen-time-saving summary of the research below – hit the right arrow to start exploring the data >>>

Over a third of people track their screen-time

Despite screen-time tracking features being relatively new on iPhones and Android devices, a lot of people already track this. Men and younger people are the most likely to track.

3 hrs 23 minutes: the average amount of time Brits spend looking at their phones every day

We spend a lot of time on our phones

An average of 3 hours 23 minutes a day to be precise. This goes up to 3 hours 58 minutes for 16-24-year-olds. Over-55s spend the least amount of time looking at their devices.

Whilst most people spend between three to five hours, a small but significant proportion of respondents in all age groups reported spending over ten hours a day.

Some people aren't happy with their usage

It seems the older you get, the happier you are with how much you use your phone. Young people spend more time looking at theirs, but they're the least happy with it.

They find it harder to relax when they have theirs with them.

They are anxious at the thought of giving up their apps.

And don't even talk to them about battery status anxiety.

What can we do about it?

Most people under 45 said that they were definitely or possibly going to reduce their screen time this year.

One way to do this would be with a 'digital detox'. Quite a few people have already tried one.

And it seems to work too. People were generally very positive about the effects of a digital detox.

Perhaps not looking at our phones in the hour before we go to bed would be helpful too. But most people are still looking at their smartphone screens in the build-up to bedtime.

People not only use their phones before going to bed, but in bed too. And on the toilet...

For most younger respondents, screen-time in the loo is the norm.

And men are seemingly more comfortable with this behaviour than women.

What are people doing on their phones?

It's not all bad. Phones have opened up the world to many people, giving them access to information, entertainment and educational resources on the move that would have been unimaginable just a few years ago.

Concerns about children's usage, but people see positives too

Parents told us that they were worried about how much time their children spend mobile devices, and about the emotional impact it may have on them.

Most people who were asked how their phone made them feel picked more positive words than negative (the bigger the word, the more people picked it). 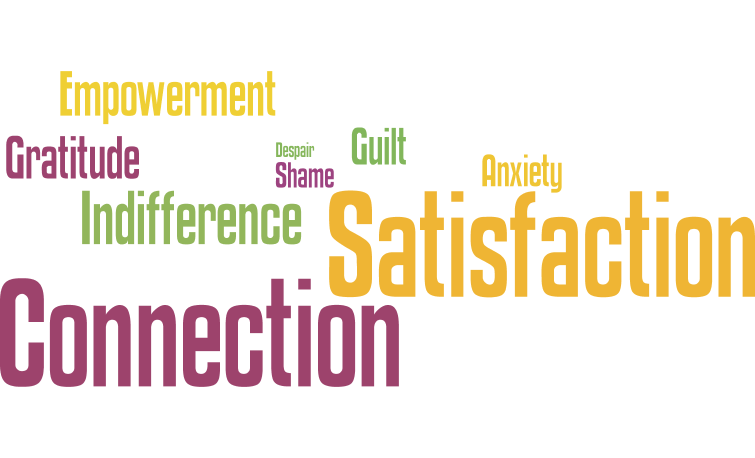 Are we sleep-walking into a digital dystopia?

Or are the hazards of our digitally-connected world being over-hyped?

The jury is out on whether digital technology in general is going to make us happier in the future...

All respondents are double opted in (with an opt in and validation process) and complete a profiling questionnaire when joining the online access panel. Their data is then stored so we are able to target specific sectors and demographics easily.

Respondents are invited to participate in surveys via email. All surveys are incentivised according to the specialism of the panel, rewards include; points for prizes, cash and air miles all of which vary in value depending on the survey length.

Accuracy of the panel:

Censuswide.com complies with the MRS Code of Conduct (2010) which is based upon the ESOMAR principles (for more information visit www.esomar.org)

The main principles for the code are: