Salma Alam-Naylor talks through her first 6 months at Code.

I joined Code in July 2019 as a Software Development Lead with the promise of being empowered to make change and be brilliant, backed up by a solid Studio Manifesto that, at the time, seemed too good to be true.

After a variety of past experiences in the digital industry strewn with JFDIs, opinion-based development and feature-churn, I was truly excited at the prospect of Product Thinking - doing the right thing, doing the thing right, and doing it together.

With this opportunity came a commitment from Code to my ‘development and role in improving [Code’s] skills, approach and culture’. This was everything I had been looking for in a role.

So, how did my first six months in the role play out? And how have I helped to influence positive change?

1. Taking a team from ‘Forming’, to ‘Storming’ to ‘Performing’ in 4 months 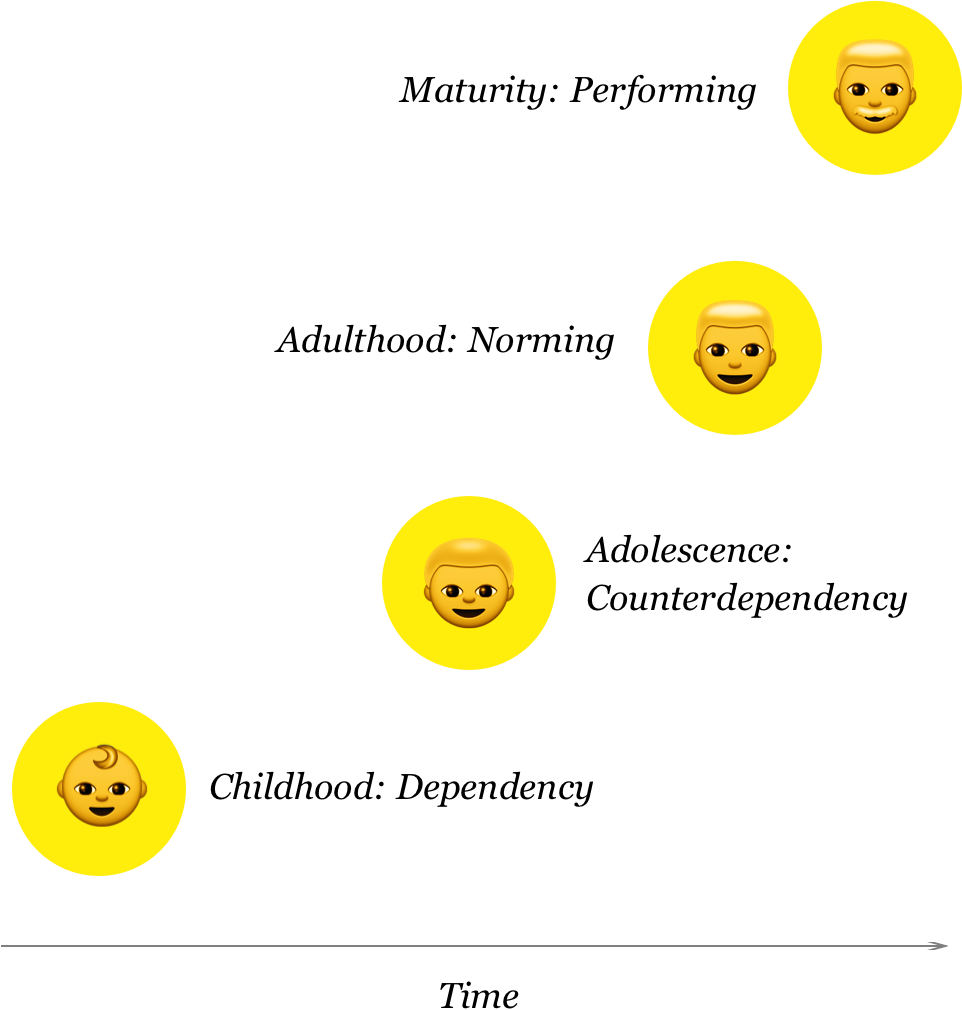 The team I joined had been without a dedicated Software Development Lead for a while, and some challenging partner relationships had resulted in lack of engagement with the team’s products, counter-dependency and conflict. The team were most definitely in the teenage-like ‘Forming’ - ‘Storming’ stages. This, coupled with a jackpot of starting build on two Greenfield products upon my arrival, presented me with an exciting opportunity to revive and nurture a talented team with lots of untapped potential.

As of January 2020, I am proud to say that the team is now thriving and ‘Performing’ incredibly, so much so that we have secured Code’s biggest ever single-partner retainer.

That’s some progress in 6 months!

So how did we do this?

a. We committed to reliable, repeatable routines

Over the course of my diverse work experience as a musician, classroom music teacher, comedian (no, really), a team lead at both startups and big organisations, and as a parent, I have found the power of reliable and repeatable routines to be fundamental to success. My primary goal as a leader has always been to nurture, empower and liberate, with a view to not being ‘needed’ to make decisions for the team or its products. I’ve always recognised that I will never have all the answers, and it is up to the team to solve problems collaboratively.

When a team (or individual, or child) operates within a defined and predictable framework, and when all team members openly commit to a set of repeatable routines together, this cultivates a sense of psychological safety; individuals feel empowered, confident, and able to take risks in solving big problems. A bond of trust is formed, and as it matures, conflict and counter-dependency is replaced by support and collaboration.

I also brought to Code a number of tactical team tools that I have developed over the years that have proved instrumental in cultivating successful teams in the past. Already other teams across the company are starting to draw on them to develop their craft. Some examples being:

Whether you follow SCRUM or Kanban practices or a mixture of both, weekly planning sessions underpinned by tangible goals keep the team motivated and ensure they are able to respond to change and new information without compromising a predictable routine.

Don’t start your sprint on a Monday!

I always refer to this exceptional article when promoting this idea. Please, read it! (When you’ve finished this…)

My preferred day of choice to start a sprint has always been a Wednesday - ‘the least worst option’ - smack bang right in the middle of the working week, never falling foul to Bank Holiday Mondays, long weekends, or that Friday wind-down feeling. Choosing Wednesday ensures as much of the team as possible are together and invested together in the sprint cycle ahead.

Plus you’ve got the weekend right in the middle of the sprint to rest and recharge, and probably solve all those tricky problems in your sleep (I’m looking at you, engineers - you know the deal).

The retrospective at the end of a sprint is a time to blow off steam, wind down, and identify challenges that the team want to tackle together in the next cycle. If you forego this, you forfeit a time of important respite and relaxation for the team, through which they can form deeper bonds of trust, understanding and rapport.

Oh, and always make sure there are retro snacks.

b. We forged the ideal product team

As Code’s first Software Development Lead specialising in front end development, I brought insight and experience to the company about the variety of front end skills that products need in order to be brilliant. When I joined Code, all product teams had only one front end developer (and therefore a single point of failure) along with software engineers, QA etc, and I knew we needed more developers with complementary specialisms in order to build two new products - and build them exceptionally well.

During my first three months at Code, I was fortunate enough to be able to recruit two new extremely talented front end developers into the team, who have both brought a variety of expertise and knowledge to the products we are building, along with their fantastic personalities. What’s more, their enthusiasm for the team, trust and togetherness has resulted in bringing the design and developer disciplines closer together, through the development of shared design systems, frameworks and languages, that other product teams are also able to use and contribute to.

c. We did the right thing, did the thing right, and did it together

Our team lives by Code’s Studio Manifesto - we solve problems, we use data to inform decisions, we prioritise experiences and we deliver iteratively, early and often. The most powerful factor in our success is that we do all of this together, all of the time, without compromise.

Gone are the days when an API would be built by a back end team and passed over to a front end developer to build the UI. We architect products, experiences and features collaboratively using JSON data contracts and systems diagrams as the glue that forges unbreakable bonds in our architecture and team spirit. (I call this the ‘Middle-Out’ architecture method - but that’s a whole other blog post!)

It’s hard to put words to how exciting, empowering and uplifting planning in this way can be. It gives me a nerdgasm. 🤓

Doing things in the interests of the end-user, collaborating and building things right is the best way to grow a modern digital organisation. However, evidence is key that our approach actually IS growing the business!

So some success metrics…

We launched a completely new beta product to the market in December 2019 that generated over £31k in December alone. And our second product, released in the same month, has seen results that could generate an extra £16m of revenue per year for that particular product.

2. I created a new network of people who care about sustainability, innovation and responsible tech

The future of this world hinges on tech for good.

Responsible tech and innovation in sustainable solutions is key in affecting positive social change. Since joining Code, I’ve set up a forum that meets regularly for anyone interested in tackling the critical issues surrounding climate change and related social issues with a completely open brief: make, change.

I’m also working hard to build a network of like-minded individuals, tech advocates and organisations across Manchester to connect Code with the region’s responsible tech collective. I know that Code possesses some of the most creative and intelligent talent in the digital industry, and I want to harness that capability to do tangible things for the world out there that really,__ make, change__.

3. I contributed in addressing diversity within the leadership team

At the monthly company meeting, Louis (our MD) brings out his ‘Ask Me’ box, where he invites us all to submit questions anonymously that he can respond to in a public forum. In August 2019, I asked ‘What are you doing to address the issue of inclusivity and diversity on the board?’ At every tech company I have worked, director-level teams have comprised predominantly male members, and upon my arrival, Code was no different.

Let’s look at some data. A 2019 report from Tech Nation found that only 19% of tech workers are women. However, what’s more compelling is that “over the last two decades, the proportion of women on tech boards has remained the same, despite a great deal of recent public attention and number of interventions from companies and government.”

So what happened next? Code remained true to its word and I was able to play a role in improving the company’s culture.

In October 2019, the ‘board’ was relaunched as the Leadership Team, and I was invited to participate with a number of other influential heads of discipline. This has shifted the make-up of the Leadership Team considerably, taking it from 10% female representation to 29% - which is significantly above the 22% UK average published by Tech Nation.

At Code, I truly feel empowered to make change at both a team level and an organisational level. I’m already working on a number of initiatives as part of the Leadership Team including relaunching the Mental Health Ally programme, and I’m excited to see what 2020 holds.

If you’re just starting out in a new role and want to make a positive impact, here’s some closing advice that will be relevant at any company.

Your personality is what makes you, and hopefully one of the reasons why you have just landed a new role. Modern digital businesses like Code are placing more and more emphasis on the contribution of the individual to their organisation - because a melting pot of characteristics, preferences, passions and beliefs are what makes a company culture thrive through inclusivity.

Don’t hold back in letting people get to know you; it is through being open, honest and authentic that you will form stronger bonds of trust with your colleagues from the outset, and build better products and relationships as a result.

Spend time in the first few weeks and months listening to your new colleagues to get a wider understanding of the business and how it operates, its culture and its quirks. If a common challenge strikes a chord with you, note it down, and begin to explore how you can be part of a new solution to improve things around you and for others. This, as a result, will widen your network in a new organisation, breaking you free from the confines of your own team and allowing you to find your feet as an individual.

And finally…. Question everything

And the most important question you can ask is ‘Why?’.

“Learn from yesterday, live for today, hope for tomorrow. The important thing is not to stop questioning.” - Albert Einstein