I’m inside the Financial Times tent at The Next Web event in Amsterdam. It’s been packed for the whole two days, with people queuing outside the entrance almost permanently.

Francesca Bria and Daria Tataj are being interviewed by Tim Bradshaw, The FT’s Global Technology Correspondent. 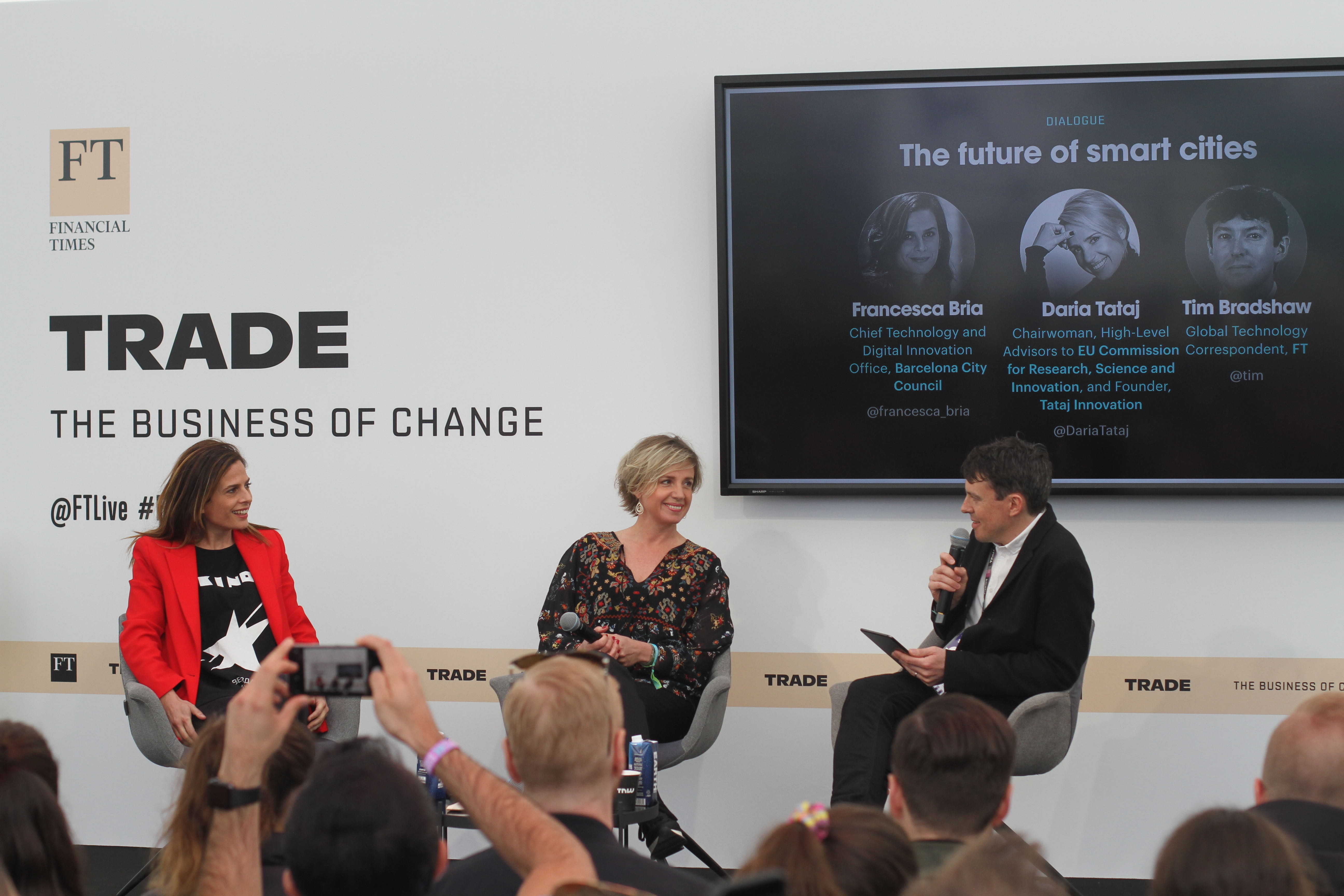 Francesca is on a mission to transform Barcelona into a ‘Smart City’. She’s digitally transforming it, to use a term.

It’s hard to pick out more than a handful of organisations that have 'digitally transformed', or at least radically and with any pace. Even defining it is difficult. It sometimes feels like it's more a state of mind, a whole bunch of projects and programmes with no defined end. Frustrating. What it generally entails is real change both behind the scenes and in the products and services that organisations deliver.

To manage such a task, it's clear that a new kind of leader is necessary.

What makes Francesca stand out at this and many other digital conferences is her charisma and lack of waffle. She commands the room like a seasoned (and popular) politician. You get the sense that if anyone can deliver a programme of transformation, it’s her. She’s got a fire in her belly and she’s taking a whole city with her.

Barcelona’s achievements so far are impressive:

Barcelona has implemented a sensor system for drivers that guide them to open parking spots.

A LED-based lighting system, along with a sensor network, have replaced the street lights across Barcelona. Sensors can adjust lighting based on the presence of people and the time of delay.

The citizens of Barcelona deposit their residential waste into smart bins with the help of smart waste disposal systems. These smart bins use a vacuum and suck the waste into underground storage.

The city bike system of Barcelona is known as Bicing. However, it is only for the Barcelona residents.

The city has integrated a new orthogonal bus network of diagonal, vertical, and horizontal lines, making it more frequent, easier to use, and faster.

Easy-to-use and low-cost sensors have been built that can detect noise-levels, air pollution, temperature, and humidity.

Barcelona emerged as the Mobile World Capital after beating 29 other cities.

70% of the council’s agenda is driven by residents, of whom over 400,000 actively participate, driving change such as getting more green space and banning cars from whole areas.

Francesca talks passionately about giving her citizens the right to own their data, shifting the balance between tech companies and citizens with immeasurable benefits.

It's clear Barcelona have a great hire in Francesca, but what strikes me is how few Francesca's there are out there. It's an overgeneralisation, but current leaders of non-digital organisations and businesses aren’t digital natives. They didn’t rise up through the digital ranks and so the leaders that are there tend to have the leadership skills but lack the knowledge and passion.

On the other hand, digital natives aren’t leaders. People don’t go into digital to lead (again, a massive generalisation) - they go into it because they want to make things.

A digitally native and visionary leader is an essential hire if non-digital entities are to keep up. The leadership qualities are the same, but they have a knowledge of digital to back them up.

What makes a great digital leader?

Her passion shines through. She’s enthusiastic and with that, engaging. People with the skills, knowledge and experience digital transformation needs will thrive under her and those stakeholders better listen.

There's no waffle. Nothing is dressed up in corporate speak and she radiates authenticity.

She knows that change causes short-term disruption for long-term gains and she’s not going to apologise. There’s a bigger goal at stake for her.

Understanding the technology puts her in a position of control over it and pretty much anyone else she comes up against, whether that be stakeholders, journalists or Facebook. Her background, including her work at NESTA, puts her at a great advantage.

Towards the end of the discussion, Tim tries to prod a little. He talks about how the banning of Uber had left him and other conference goers without transport in Barcelona at a recent conference, which was made worse by the trains being on strike at the same time.

“Change is hard”, she says with a smile, “that’s the battle”.